The following is taken from New York in the War of the Rebellion, 10th ed. Frederick Phisterer. Albany: J. B. Lyon Company, 1912.

First organization: Capt. Edwin S. Jenney recruited and organized a battery in November and December, 1861, known under this designation. January 31, 1862, it was transferred to the 3d Artillery, as Battery F of the same.

Second organization: The 2d Excelsior Battery, recruited and organized for the Excelsior Brigade, under authority of the War Department, dated October 1, 1861, in New York city, and there mustered in the United States service for three years, April 9, 1862, was designated by the State authorities the 10th Battery. The men enlisted for the 3d Excelsior Battery, which failed to complete its organization, were transferred to this battery, which, commanded by Capt. John T. Bruen, left the State April 10, 1862. It served at and near Washington, D. C, from April, 1862; with the 2d Corps, Army of Virginia, from June, 1862; with the 1st Division, I2th Corps, Army of the Potomac, from September 12, 1862; with the 3d Division, 3d Corps, from December, 1862; in the Artillery Brigade, 3d Corps, from May, 1863; in the Artillery Reserve, Army of the Potomac, from May 12, 1863; in detachments with the 1st Battery, N. H. Volunteers, Battery E, 1st Mass. Volunteers, and Batteries C and G, 1st R. I. Artillery, from June, 1863; in the defenses of Washington, D. C., 22d Corps, from July, 1863; and, June 21, 1864, commanded by Lieut. C. T. Bruen, it was transferred to the 6th Battery, having during it service lost by death, killed in action, 3 enlisted men; of disease and other causes, 9 enlisted men; total, 12.

Tenth Independent Battery.—Capt., John T. Bruen. A battery known under this designation was recruited by Capt. Edwin S. Jenny late in 1861, but it became Battery F, 3d N. Y. artillery, early in 1862. The 2nd Excelsior battery, recruited and organized for the Excelsior brigade, at New York city, under authority dated Oct. 1, 1861, was designated by the state authorities the loth battery. It was mustered into the U. S. service for three years, April 9, 1862, and left the state the following day. Attached to the 2nd corps, Army of Virginia, it was active at Cedar mountain, and in Pope's Virginia campaign, righting at Rappahannock Station, Rappahannock river, Sulphur Springs, Groveton and the second Bull Run. It was with the 12th corps at Antietam, and with the 3d corps at Fredericksburg and Chancellorsville, sustaining a loss of 13 wounded and 5 missing in the last named battle. It served by detachments in different batteries at Gettysburg, where it lost 2 killed and 3 wounded, and the remainder of its term was spent at Washington in garrison duty. On June 21, 1864, commanded by Lieut. T. C. Bruen, it was transferred to the 6th N. Y. battery. It lost 3 men killed and 9 men by disease.

Muster Roll (There is no muster roll for this unit) 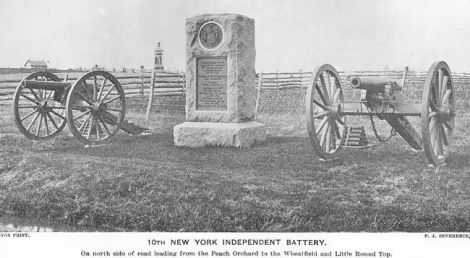