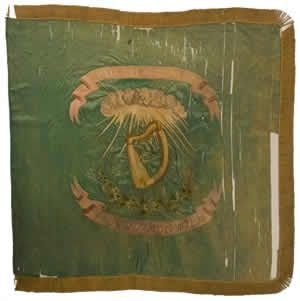 On November 18, 1861, a group of New York City Irish-American ladies presented this green silk “Irish Color” to the 69th New York Volunteers. The presentation occurred outside Archbishop John Hughes’ home on Madison Avenue. Reverend William Starrs, Vicar-General, delivered an address in Hughes’ absence, the Archbishop was in Europe at the time, and Colonel Robert Nugent accepted the flag from Mrs. Samuel Chalfin, on behalf of the ladies. The 69th New York Volunteers carried the flag throughout most of 1862 including during the Siege of Yorktown, Virginia, the Peninsula Campaign, and at the bloody battle of Antietam, Maryland, September 17, 1862. During this battle, eight color bearers were wounded and Captain James E. McGee distinguished himself for, “picking up the green flag, the bearer of which had been carried from the field wounded, and bearing its folds aloft throughout the battle.” On December 2, 1862, Captain McGee brought the flag back to New York City and the color was retired. This green silk flag features an embroidered harp in the center surmounted by a Fenian sunburst. Below the harp is a length of embroidered shamrocks. Above the harp is a scroll with embroidered "1st REGt IRISH BRIGADE." Along the bottom is another scroll with embroidered "RIAM NAR DRUID O SBAIRN LANN" or, "Who Never Retreated Clash of Spears," from the ancient tale about Ossain.