Seventieth Infantry.—Cols., Daniel E. Sickles, William Dwight, Jr., J. Egbert Farnum; Lieut.-Cols., William Dwight, Jr., J. Egbert Farnum, Thomas Holt, Daniel Mahan; Majs., J. Egbert Farnum, Thomas Holt, Daniel Mahan, William H. Hugo. The 70th, the 1st regiment of the Excelsior brigade, was composed of companies from New York city, Port Jervis, Paw Paw, Mich., Pittsburgh, Pa., Boston, Mass., Patterson and Newark, N. J., and was mustered into the U. S. service at Camp Scott, Staten island, June 20, 1861, for a three years' term. It left for Washington on July 23; was quartered in the city for a.short time and then assigned to Sickles' brigade, Hooker's division, on guard duty at the forts along the Maryland side of the Potomac. Co. G joined the regiment in October, being mustered in at Washington on Oct. 8. In the disposition of troops preparatory to the advance on the Peninsula. Sickles' brigade became the 2nd brigade, 2nd division, 3d corps, and reached Yorktown in April. In the battle of Williamsburg, the first battle of consequence in which the 70th took part it met with the heaviest loss of its service. Out of 700 engaged the loss was 330 killed, wounded or missing. At Fair Oaks and in the Seven Days' battles the regiment was active and embarked at Yorktown, Aug. 20, for Alexandria, whence it moved at once to the support of Gen. Pope at Manassas. In a sharp encounter at Bristoe Station, the 70th lost 5 men and at the second Bull Run 23. The regiment returned to Washington and was stationed in that vicinity until November, when it moved to Falmouth. It was present at the battle of Fredericksburg, returning immediately afterward to its camp at Falmouth, which became its winter quarters. It was next in the field at Chancellorsyille, and at Gettysburg lost 113, killed or wounded, and 4 missing. In the southward movement, the brigade met the enemy in a brisk engagement at Wapping heights, fought at Kelly's ford, participated in the Mine Run campaign, and spent the winter at Brandy Station. In the reorganization of the corps, the regiment was assigned in April, 1864, to the 2nd brigade, 4th division, 2nd corps, and on May 13, to the 4th brigade, 3d division, 2nd corps. It shared in the memorable cam-paign under Gen. Grant until July I, 1864, when it was mustered out at the close of its term of service, the veterans and recruits being transferred to the 86th N. Y. infantry. Although not in service as long as the preceding New York regiments, the 70th won its right to be known as one of the "three hundred fighting regiments" by many an instance of gallantry and the loss of 182 by death from wounds out of a total enrollment of 1,226. It also lost 70 by death from disease, etc. 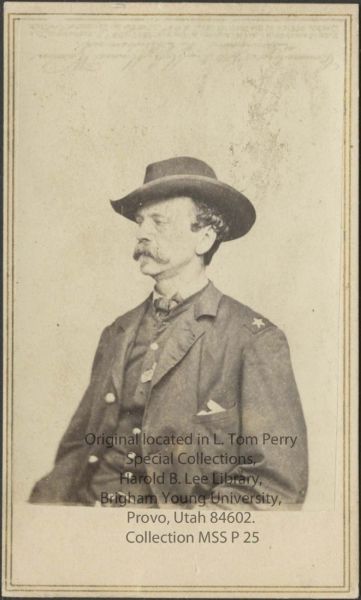 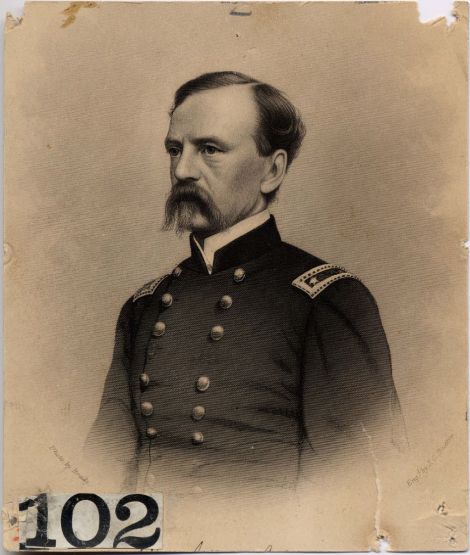 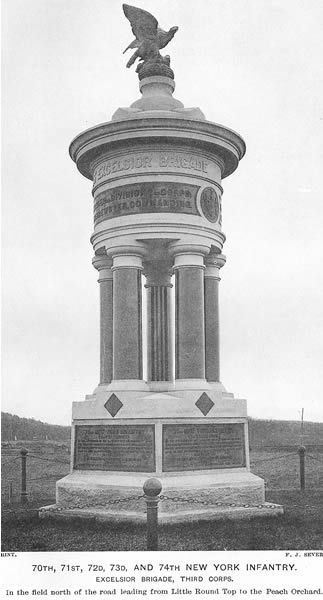 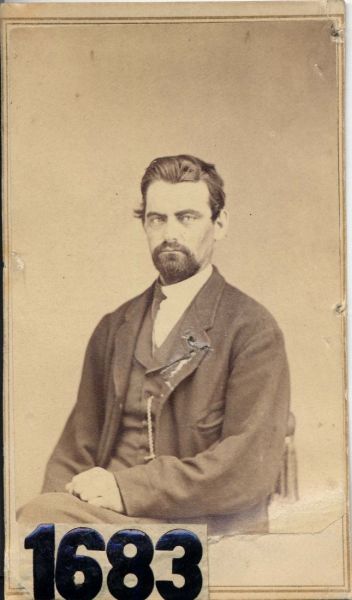 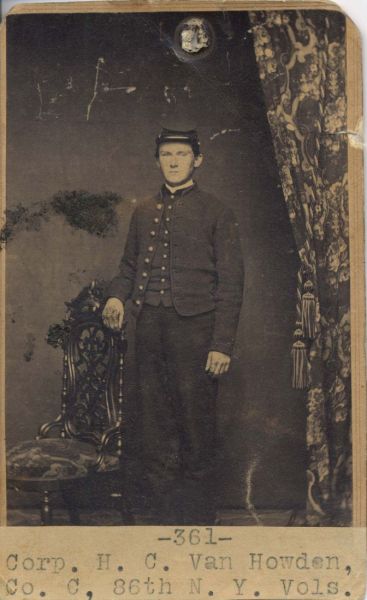 A brief memento to Captain Henry Brooks O'Reilly of the First excelsior regiment, who fell in the battle of Williamsburg, the first battle of the Army of the Potomac on its march from Yorktown to Richmond, May 5, 1862. [Rochester: 1862].

Botsford, William R. BrakeColl
(Excerpt of Lt's letter written to family of Sgt who was KIA, Jul 6, 1863)
Located at the Military History Institute in Carlisle, PA.

Dwight Family. Papers, 1815-1942, bulk: 1847-1885.
Description: 76 boxes, 1 v., and 2 oversize containers.
Abstract: Family correspondence of William and Elizabeth A. Dwight and their children--William Jr., Wilder, Daniel A., Howard, Charles, and Chapman Dwight--and a long series of letters from Elizabeth to her step-mother Ruth H. White. Family letters detail life in Salem and Springfield, Mass., business, travel, and schooling of the Dwight children at Phillips Exeter Academy, Harvard College, Kingley's Military School, and the U.S. Military Academy at West Point. There are a large number of Civil War letters of Wilder (2nd Mass. Infantry), William, Jr. (70th New York Infantry and U.S. Dept. of the Gulf stationed at New Orleans), Charles (70th New York Infantry), and Howard Dwight (24th Mass. Infantry and 1st U.S. Western Cavalry), including an account of the Battle of Antietam. In addition, there are business papers and an account book of William Dwight Sr., kept while serving as treasurer of the Laconia and Pepperrell Cotton Mills in Biddeford, Maine, as treasurer of the Saco Water Power Company, and also as President of the White Water Valley Railroad in Ohio.
General Info: Unpublished guide in the library
Located at the Massachusetts Historical Society.

Proctor, Wilbur Huntington, 1849-  Wilbur Huntington Proctor diary and photographs, ca. 1855-1912, bulk ca. 1855-1874.
Diary documents the activities of Wilbur Huntington Proctor from January 1864 to April 1874, including his military service in the United States Civil War and in the Idaho territory, and his life in New York City after military service. Entries consist primarily of general descriptions of daily activities and acquaintances. The collection includes ambrotype, tintype and carte-de-visite photographs of Proctor and his immediate and extended family, ca. 1855-1869. The collection includes a certification made in 1891 of his first military discharge and a certification made in 1912 for his military pension. The diary entries document the deaths of his brother William Henry Proctor, Jr., in July 1865, and his maternal grandfather Pliny Hickok in March 1874; and the births of his son, Frederick Wilbur Proctor in March 1871, and daughter Florence Adelaide Proctor in July 1873. Several pages in the diary provide brief genealogical data of the Proctor, Hickok, and Langdon families. Pages for the period from February 1869 to February 1870, which includes his marriage to Fanny Jane Algeo in March 1869, are missing. The collection includes photocopies of a transcription of the diary by Proctor's grandson, Robert Huntington Proctor, published in three consecutive issues of Crosstimbers: A Multicultural, Interdisciplinary Journal (Chickasha, Oklahoma), Volume 3-4, Fall 2003-Fall 2004. Ambrotype photographs in a cases, ca. 1855, include a portrait of Proctor with his brother, William Henry Proctor, Jr.; a portrait of Sara Adelaide Hickok Proctor, his mother; and a portrait of Aliza Huntington Proctor, his paternal grandmother. The tintype photograph in a case depicts William Henry Proctor, Jr., in his military uniform, ca. 1864. Cartes de visite photographs of Proctor include several portraits taken in 1865 and 1868, including him in military uniform, civilian clothing, and in theatrical costume portraying the Shakespearean characters of Richard III and Romeo. A cartes de visite photograph taken in 1868 depicts Proctor with his wife Fannie Jane Algeo Proctor. Another 1868 image depicts her alone. Cartes de visite of relatives of Wilbur Huntington Proctor, ca. 1867-1869, include single portraits of his mother; his paternal grandmother; his maternal aunt Lucy Ann Hickok Frost, her husband Cyrus Frost, and their son William Nelson Frost; his maternal aunt Harriet P. Hickok Crawford; his maternal uncle Reverend Henry H. Hickok; his maternal aunt-in-law Angeline Hickok, the wife of George S. Hickok; and Harriet E. Hickok, probably a cousin. Identified photographers represented in the collection include New York City photographers Peter Baab, R. G. Barcalow, Abraham Bogardus, Julius Brill, George T. Lape, Richard A. Lewis, and George Gardner Rockwood, in addition to the firm of Bolles & Frisbee in New London, Connecticut.
Located at the Beinecke Rare Book and Manuscript Library, Yale University.

Thayer, David, et al. Papers II, 1817-1889.
Personal and business papers of David Thayer, homeopathic physician, abolitionist, and legislator of Boston, Mass. containing Civil War correspondence pertaining to the treatment of the wounded, Afro-American troops, and the extension of slavery into Kansas. One letter includes a manuscript map of the area around Long Island and Ft. Sumter (S.C.) in 1864. Correspondents include Warren M. Babbitt (55th Mass. Volunteer Infantry), William H. Bugbee, Edward S. Bunker, and Alfred E. Parker (70th N.Y. Infantry), Francis J. Meriam (57th Mass. and 1st S.C. Volunteer Infantry), Wendell Phillips, John S. Tyler, and Benjamin F. Weeks (28th Mass. Volunteer Infantry). Medical correspondence includes letters on war wounds, homeopathic treatments of patients, conflicts over practices and fees with other physicians, and a description of homeopathy in Europe. Political materials include correspondence on Massachusetts state and local politics, the Harbor Commission Bill of 1865, and requests for employment; an 1817 manuscript on the right of suffrage in Virginia by an anonymous member of the Patrick Henry Society; and a small collection of printed materials of the Union League of America.
Located at the Massachusetts Historical Society.

Van Ostran, Clare E. Diary, 1864.
Description: 1 folder
Abstract: Diary, Jan. 1-Aug. 16, 1864, describes camp life near Roandy Station (Va.), his duties and meals, the enlistment of new men, drunkeness and gambling among the soldiers, the weather, and fighting battles in Wilderness (Va.). Miscellaneous financial accounts continue through Dec. 1864.
Notes: Bio/History: Van Ostran, from Hartford Center (Van Buren County, Mich.), was a Corporal in Company C, 70th New York Volunteers, or the 1st Regiment Excelsior Brigade, 2nd Div., 3rd Corps, Army of the Potomac. He was mustered in July 1864. (This information is from the front of the diary. Nothing further is known about him. He is not listed in the Michigan Soldiers and Sailors Index, probably because he served in a New York unit.).
Located at Clarke Historical Library (Central Michigan University) Civil War collection of personal papers.

Wiley, Will C.  (William Campbell). William Campbell Wiley Civil War letters, 1861-1863.
Description:    37 items
Language:    English
Abstract:    This collection consists of photocopies of typed transcripts of thirty-six Civil War letters written by William Campbell Wiley dating from 1861 to 1863. He wrote primarily to his family, including a brother, Frank, and an unnamed sister, describing his health and hospital care, the activities of his regiment, and descriptions of various battles. The collection also includes an index to the letters and a summary of his war time service.
Located at Pennsylvania State University.